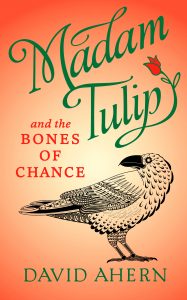 In paperback and eBook

MADAM TULIP AND THE BONES OF CHANCE
A surprise role in a movie takes actress Derry O’Donnell to a romantic castle in the Scottish Highlands. But romance soon turns to fear and suspicion. Someone means to kill, and Derry, moonlighting as celebrity fortune-teller Madam Tulip, is snared in a net of greed, conspiracy and betrayal.
A millionaire banker, a film producer with a mysterious past, a gun-loving wife, a PA with her eyes on Hollywood, a handsome and charming estate manager—each has a secret to share and a request for Madam Tulip.
As Derry and her friend Bruce race to prevent a murder, she learns to her dismay that the one future Tulip can’t predict is her own.

Madam Tulip and the Bones of Chance is third in the Madam Tulip mystery series.
If you’d like to be first to hear details of new Tulip releases and special offers, sign up to the Tulip Newsletter.

“Would I recommend it? Without a doubt! These books should be on the best seller lists!” – behindthewillows

“… there’s plenty of good comedic writing … a mystery you can’t really guess the solution to, a little peril, a dash of romance and some fun characters.” – irresponsiblereader

“Another hilarious and suspenseful Madam Tulip book.  A page turner just like the previous two.” – theaspiringwordsmith

“As with any good series, this just keeps getting better and better… I don’t hesitate to give five stars and say that I can’t wait for the next book.” – barbtaub